Information About People of Nepal 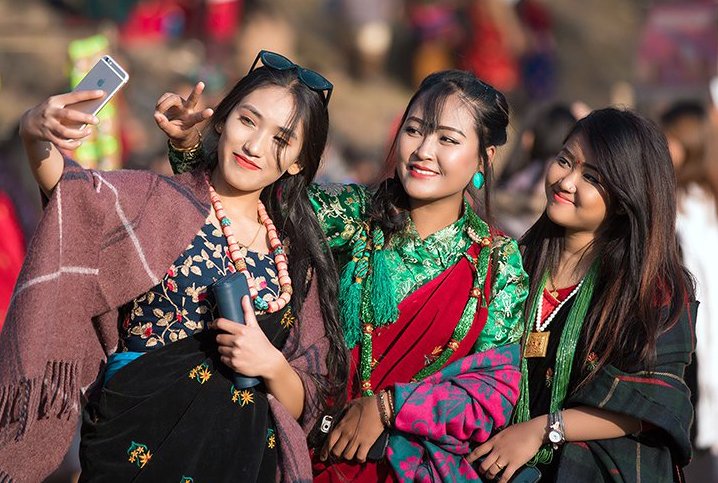 This article will give you insights about the people living in Nepal. There are several castes and races of people living in this small country. By the end you will be able to find differeence between different castes of People in Nepal.

It is very simple and fun to greet in Nepal. You just have to join your hands and say ‘Namaste’. If your greeting is accompanied by a smile then it has sure chances of acceptance.

The acceptance comes back to you like the same word or sometimes a smile in case you are greeting an elder. People who travel to Nepal say Nepalese are the friendliest people in the world. No doubts! as our culture reflects so.

Nepal is a very very diversified country which homes people of multiple religions, race, tribes, and culture. Over 100+ ethnic groups are home to this small landlocked country. Along with such diversified groups comes flavors of various cultures and languages.

Nepal’s population is estimated to be around 26 million. The Central Buerue of Statistics recognizes 59 ethnic groups of people speaking different languages.

Among those, the group is broadly divided into two categories; Indo-Aryan and Mongolians. The first people of Nepal came in the period of the Mulsim regime in the Indian sub-continent.

Most of them regained in the Himalayan and hilly slopes and there is evidence that suggests they had arrived from the North. These people are regarded as the aboriginal of the country. Later, nomadic tribes added in hilly and terai regions which now contribute to the agrarian system.

Brahmans are the most senior social caste members. The Brahman categories are two: “Kumai Brahmans” and “Purbiya Brahmans.’ In their derived homeland they only differ.

The “Kumai Brahmans” are supposed to come from Kumaon in the northern part of India west of Nepal. The ‘Purbiya Brahmans’ come from the east of Nepal and are found throughout the country.

The Brahmans are the caste of priests. In all Hindu temples, the Brahman priests are exclusive. Nepali, which was originally spoken by brahman, is the official language. Also, Brahmins get better training compares to other ethnicities. They held important positions in government and education systems.

The Chhetris and Thakuri are second after Brahmans in Nepal’s caste hierarchy. It is indeed the rulers, the warriors, and the leaders. The Brahmans are the teachers and priests of the family. You are a Hindu orthodox.

In the 12th to 13th centuries the Thakuri originated in the north part of Nepal. Also, the most influential and good-to-do social classes are Chhetris and Thakuris in Nepal. They are mainly in high-ranking military and police offices in government. Some are still farmers and relatively poor and live as other ethnic groups.

The people of the Gurung, also known as Tamu, have a diverse ethnicity in Nepal. Their population in Manang, Mustang, Kaski, Lamjung, Gorkha, Parbat and Syangja district is high.

According to the 2011 Nepal census, the Magar in Nepal’s third-biggest linguistic ethnological group, representing 7.1% of Nepal ‘s population.

Also, the original home of the people of Magar was west of the river Gandaki and was roughly the same part of Nepal, which lies between Gulmi, Arghakhanchi, and Palpa and all around.

Sherpa is one of the most mountainous ethnic groups in Himalayas and Nepal. The term Sherpa, which refers to the geographical origin of these people in  Nepal is derived from the words Shyar (“east”), and Pa (“people”).

The majority of Sherpas live in the Eastern parts of Nepal, however, in the Rolwaling Valley and the Helambu region north of Katmandu some are situated further west.

Tharuare is one of the Terai’s most ancient and original indigenous ethnic groups. Also, they spread through the length of the plain of Nepal and reach west into the foothill of the Kumaon. Also, different Indo-Aryans like Maithili in the East, Bhojpuri in the Central, and Awadhi in the west of the Terai have greatly influenced the Tharu language.

Tharus has its own special religion and animism of practice. Their culture is particularly suitable for the warm plains and is actually immune to malaria. Also, the Rana Tharu of Western Terai claims to have Mondoloid features with dark-brown and speaks their own language.

Newar is the original Kathmandu Valley population and indigenous ethnic group. Also, they are native to the Kathmandu Valley, Banepa Valley, Dhulikhel Valley, Bhojpur, Tansen, and other parts of Nepal. Mainly traders are Newars. Despite their small numerical contribution, they play an important part in the history, art, architecture, and business activities of the magnificent civilization of the three cities-Kathmandu, Patan and Bhaktapur.

Please let us know if we missed anything. it helps us to make our website a better place to gather facts. Cheers to Nepal Facts!